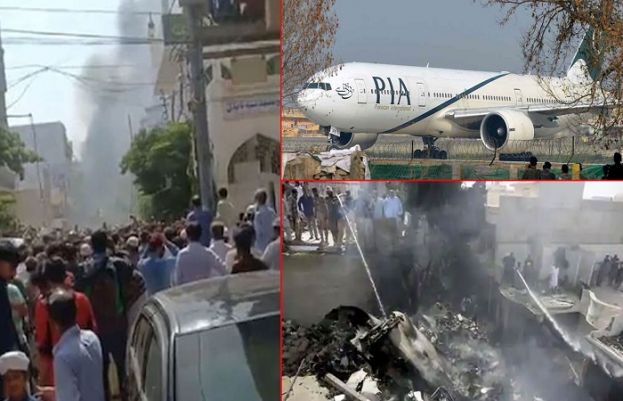 The earliest aviation accident in Pakistan:

On February 25, 1956, a Gilgit-Rawalpindi freight plane has crashed near the village of Jalkot in Lastgarush Galli due to rain, sleet and thunderstorm, killing all three people onboard.

The wreckage of this aircraft was found on March 11, 1956. The probable cause officially listed was pilot error, while he was attempting a flight beyond his ability or experience. Here follows the timeline and chronology of some other major air tragedies in Pakistan during the last six decades:

On July 1, 1957, some 24 people had lost lives after a Chittagong to Dhaka flight had crashed into the tides of the Bay of Bengal. The wreckage was found on July 4, 1957, on the coast of Charlakhi Island, which is about 50 miles west of Chittagong.

Probable cause: “The aircraft crashed after penetrating a thunderstorm and breaking up due to excessive forces placed upon the airframe.”

On May 15, 1958, a PIA aircraft had descended and struck ground after takeoff at night from Delhi Airport. The aircraft, flying for Karachi, had crashed an airport boundary fence, killing 21 of the 38 people on board.

Probable cause: “The captain did not properly observe and interpret his flight instruments and thus inadvertently permitted the aircraft to descend to the ground immediately after a night take off during which no visual reference was possible. A contributory factor may have been the slow reactions of captain due to his state of health.”

On March 26, 1965, another PIA Peshawar-Chitral flight had crashed at Lowari Pass near Dir valley, killing 22 of the 26 people on board.

On May 20, 1965, a Pakistan International Airlines Boeing 707 had crashed on its inaugural flight while attempting to land at Cairo airport, killing 119 people.

Probable cause: “The aircraft did not maintain adequate height for the circuit and continued to descend until it contacted the ground. The reason for that abnormal continuation of descent is unknown”.

On February 2, 1966, a PIA helicopter had crashed near Faridpur after striking a vulture in cruise flight, killing 23 of the 24 humans onboard.

On August 6, 1970, a Rawalpindi to Lahore flight had nosedived Rawat, killing 30 people on board.

On December 8, 1972, flying from Gilgit to Rawalpindi, a PIA Fokker F27 had nose-dived into a snow-capped mountain village called Maidan near Jallkot, killing at least 31 people.

On August 17, 1988, a US-made Hercules C-130 military aircraft had crashed near Bahawalpur, after it had caught fire, killing the then military ruler General Ziaul Haq and 30 others including Pakistani generals and the US ambassador.

On August 25, 1989, a PIA Fokker carrying 54 people had disappeared after leaving Gilgit in northern Pakistan. The wreckage has never been found. This was one of the most terrible plane accidents of Pakistan’s Aviation history.

On September 28, 1992, a PIA Airbus A300 had hit a cloud-covered hillside on approach to the Nepalese capital, Kathmandu, after the plane had reportedly descended too early, killing 167 people.

On February 19, 2003, an Air Force Fokker F27 had crashed in the fog-shrouded mountains near Kohat, killing Pakistan Air Force Chief Mushaf Ali Meer, his wife and 15 others.

On July 10, 2006, a Multan to Lahore Fokker flight could not reach its destination as it had crashed into a wheat field after burning into flames just about 10 minutes after the takeoff. Resultantly, all the 41 passengers and crew members were killed. Amongst the ill-fated passengers were the Vice-Chancellor of Bahauddin Zakariya University, Prof Dr Naseer Khan, and an internationally known Pakistani neurosurgeon, Prof Iftikhar Ali Raja.

On July 28, 2010, an Airblue Airlines aircraft (flying from Karachi) had smashed into the Margalla Hills outside Islamabad while it was preparing to land. All 152 people onboard had lost lives.

On November 5, 2010, a twin-engine plane, operated by Pakistani charter JS Air, had crashed shortly after take-off in Karachi, killing all 21 people on board. The plane was carrying staff of an Italian company to the Bhit gas field in Jamshoro district, where they were going on an exploration mission.

On November 28, 2010, at least 12 people were killed when a Russian-made cargo plane operated by a Georgian airline Sunway had crashed seconds after taking off from Karachi.

On April 20, 2012, a Bhoja Airlines plane, flying from Karachi to Islamabad, had confronted a tragedy after it was trapped in bad weather near the Pakistani capital. Officials said over 125 people had resultantly perished. This was the second-deadliest aviation accident in Pakistan after the July 2010 crash that had killed all 152 onboard, and was the fourth deadliest accident involving the Boeing 737-200 series.

On December 7, 2016, a PIA ATR-42 aircraft crashes enroute from Chitral to Islamabad. The crash claims lives of all 48 passengers and crew, including singer-cum-evangelist Junaid Jamshed.

On May 22, 2020, a PIA A-320 commercial airliner crashed near the Karachi airport. Over 100 people were onboard the plane. Their fate is not yet known.