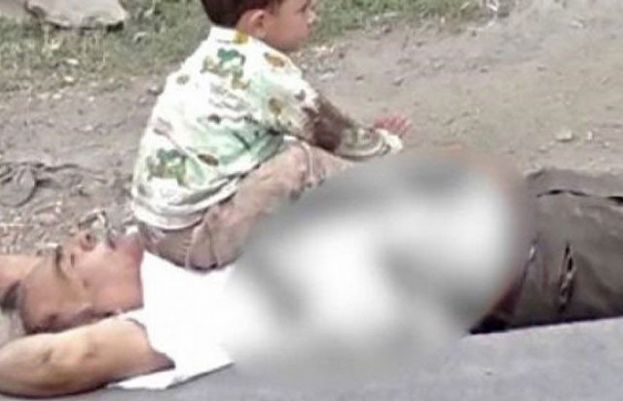 A gut-wrenching picture of a three-year-old Kashmiri boy sitting on the body of his grandfather killed by the Indian forces has gone viral on the internet, drawing ire from social media users.

Bashir Ahmed had gone out of the house to buy groceries when he was caught in the cross-fire in Kashmir’s Sopore district. The relatives of the deceased said Ahmed was taken out of his car and pumped with bullets by Indian soldiers.

The three-year-old boy was later shown sitting on top of his motionless grandfather as he cried. Another video, widely shared on social media showed the boy sitting in the back of a police van and later being led away from the scene.

Hundreds of people in occupied Kashmir staged protests against the Indian government. At Ahmed’s funeral, near the main city of Srinagar, they could be heard shouting “We want freedom” from Indian rule.

It added, during the period, at least 29 persons were injured due to the use of brute force including the firing of bullets, pellets and teargas shells by Indian troops and police personnel on mourners and peaceful protesters in the territory.