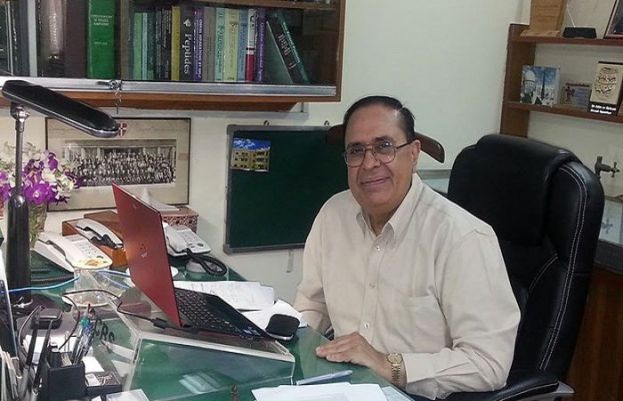 The chairman of Prime Minister Imran Khan’s task force on science and technology, Dr Attaur Rahman, on Thursday said Pakistani researchers are working on a “100 genome project” to observe changes in the structure of the coronavirus genome with samples taken from different patients.

During an interview with the Associated Press of Pakistan (APP), the renowned scientist said: “Scientists and researchers at Jamilur Rahman Centre for Genome Research, Karachi, have isolated the coronavirus and discovered changes in its structure at eight places as compared to the original virus found in China.”

“We were in contact with several international companies for vaccine production after which one company agreed to conduct clinical trials of their vaccine in Pakistan,” he said.

Hoping that DRAP will approve clinical trials of this vaccine within two weeks, Dr Rahman said that the trials will be conducted “under our supervision” soon after approval.

Dr Rahman said if the results are positive, the mass production of the vaccine will begin.

Depending on the successful trial of the vaccine, it can be available in Pakistan between the months of December this year and March next year, he said.

“As we are involved the process, we will get this vaccine by the company on a preferential basis.”

Listing other measures taken by the government to tackle the pandemic, Dr Rahman said a major programme titled ‘PROTECT’ has been initiated to conduct clinical trials of different internationally approved drugs including hydroxychloroquine and erythromycin in Pakistan.

This project, with the involvement of a dozen institutions of the country including hospitals, research institutions, and universities, will help check the effectiveness of these drugs on our population.

It will also reveal the extent to which these drugs can effectively fight the coronavirus strain that exists in our country, he said.

The clinical trials on these drugs are already in progress in other countries.

Maintaining that the government is also taking measures to expand the testing capacity, he said: “We were conducting only 400 tests during the month of March and now the capacity has increased to up to 30,000 tests per day.”

For this purpose, several laboratories were established including Punjab Forensic Science Agency in Lahore, which is fully equipped to conduct tests on a larger scale, he added.

International Centre for Chemical and Biological Sciences based in the University of Karachi is also conducting tests on a larger scale, Dr Rahman said.

On the local manufacture of ventilators, Dr Rahman said that three designs of ventilators got approval from DRAP out of 11 that were shortlisted. The prototypes of the selected designs are being developed after which the manufacturing process will start.

The ventilators handed over to National Disaster Management Authority (NDMA) by the Prime Minister recently were based on Turkish technology. The kits were imported from Turkey and assembled in Pakistan.

However, now, Pakistani experts will be able to completely manufacture ventilators with their own technology.

He said that the local manufacture of safety equipment like masks, suits, gloves, sanitisers, testing kits, etc., would help increase the country’s exports and will lead to self-reliance.

Healthy diet can reduce the risk of cancer, benefits of broccoli

Pandemic will further spread if SOPs not followed by the citizens: Dr zafar mirza

Sinopharm says coronavirus vaccine could be ready by year-end