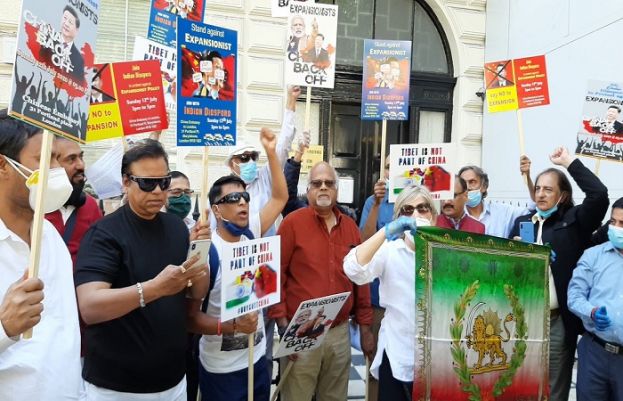 A protest outside the Indian Embassy in London, encouraged by the Indian government following a clash between Indian and Chinese soldiers in Laddakh, failed on Sunday as only 20 supporters of Bhartiya Janta Party (BJP) answered the call for a protest demanding a boycott of China.

The turnout was disappointing for the organisers who had spent thousands of pounds for the massive campaign to bring out the maximum number of diaspora communities outside the Chinese Embassy near Oxford Street but at its peak, only about two dozen protestors linked with the BJP’s UK branch gathered.

The Indian government has come under pressure for failing to respond to China’s strong response after India violated the boundary of the Line of Actual Control.

Retired Indian generals have called on the government to hit back at China for taking control of nearly 35 kilometres-long strategic area and for killing Indian soldiers but the Modi government has stayed quiet – relying on protests at home and abroad.

The protest organisers confirmed that they had support from the Indian High Commission officials for the protest.

The protest was organised, according to the organisers, to condemn the “expansionist policy of China”. The protesters held placards which read “China back off”, “Boycott China”, and “Boycott Chinese goods”.

The turnout was so low that the BJP supporters mingled with the dissident Iranian groups across the road with anti-China banners to make the protest look bigger and as their own.

The protestors relied on the sound system of Iranian protestors who were chanting slogans against the Iran government and demanding return of the Shah of Iran’s family to power. The BJP protestors supported slogans of Iranians dissidents for an hour and then broke away to stand at the doorsteps of the Chinese embassy where the numbers count stood at 16.

The OFBJP had announced that more than 1,000 community members had promised to attend the protest but one of the organisers accepted that the turnout was dismal.

The campaign for the protest was run through Indian media, social media and BJP-linked temples.

In an ironic twist of events, the organisers of the protest said they supported the human rights of Muslims and other minorities in China. The same protestors have often protested in London against Kashmiris, Sikhs and Christians who have spoken against Indian occupation and rights violations of the minority communities by the Indian Hindutva regime.

Justice Ruth Bader Ginsburg’s replacement will be a woman: Trump

Reference against Ahsan Iqbal in final phase in Sports City…

WHO alarmed on Europe situation as global COVID-19 cases…

Eggwhite reduces the bloodpressure – SUCH TV

China coronavirus vaccine may be ready for public in…

Prev Next 1 of 33
You cannot print contents of this website.