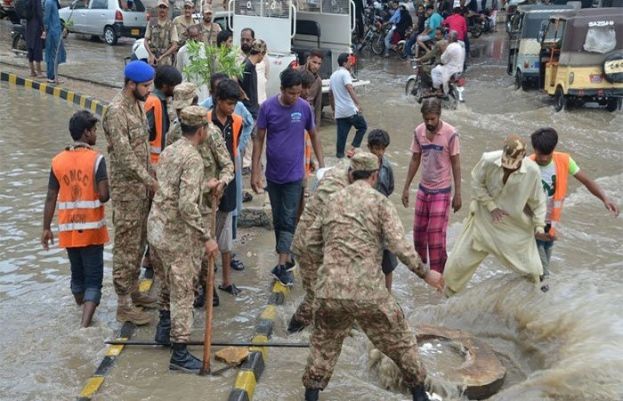 The Sindh government, Corps Headquarters, and the National Disaster Management Authority have decided to remove encroachments from the major nullahs in the city that caused inconvenience to the public during the recent rains.

The Frontier Works Organisation has been tasked to clear the sludge from the three main storm drains of the metropolis.

The decisions were taken at a high-level meeting on Friday under the chairmanship of Sindh Chief Minister Syed Murad Ali Shah.

It was decided that with the help of the Army and Rangers personnel, encroachments from the drains would be removed, restoring the natural water disposal mechanism by the local government.

The meeting also decided to hand over the cleaning of three storm drains to Frontier Works Organization (FWO), including Gujjar Nallah in district Central and CBM Nallah in district Korangi, and address the drainage issues of the Green Line project.

The construction company will clear both sides of Shahrah-e-Faisal and the sludge will be taken out from the drains and discarded at the dumping sites of Jam Chakro and TP-1.

The meeting was informed that 38 nullahs were under the Karachi Metropolitan Corporation (KMC) jurisdiction and they were being cleared under the World Bank’s project — SWEEP.

Furthermore, the District Municipal Corporations (DMCs) have 514 smaller nullahs and the bodies were responsible for cleaning them.

The Sindh government has provided them with additional funds, for the purpose.

Talking about the rain that had lashed the city and choked the drains, CM Shah said that 63 to 86mm downpour struck in less than an hour during July.

The rain had overwhelmed the sewerage system and storm drains, he said.

The existing infrastructure can only sustain 25 to 30mm in 30 minutes of rain, which caused massive spillage and inundation of localities across the city, Shah said.

On July 17, the major artery at Roomi Mosque was blocked due to the encroachments at Gulshan-e-Zafar, adjacent to PECHS and Shahrah-e-Faisal, following 63mm rainfall.

Korangi’s Zaman Town was similarly flooded with two feet water due to encroachments.

On July 26 — after more than 86mm rain in an hour — Gulistan-e-Jauhar was inundated as a private educational institution had encroached upon the nullah, preventing it from being desilted.

The blockage causes water to overflow and led to the accumulation of water at KDA, Sakhi Hassan, and Nagan Chowrangi, on July 27, following 74mm rainfall in an hour.

The system was already overwhelmed by flash water from hill torrents that flooded Kashmir Muhalla in Orangi Town.

CM Shah, talking about WB’s intervention for improvement of solid waste collection and disposal system, said that under it, nullah cleaning had been undertaken.

The provincial government has spent nearly $8 million and has already released Rs200 million for the purpose, he said.

The corps commander Karachi and Chairman NDMA assured CM Shah that they would support the province in rectifying design defects of the nullahs and Green Line project’s infrastructure.

Eidul Azha being celebrated across the country with religious fervor

Pakistan to react strong against any Indian misadventure along LoC: FM Qureshi