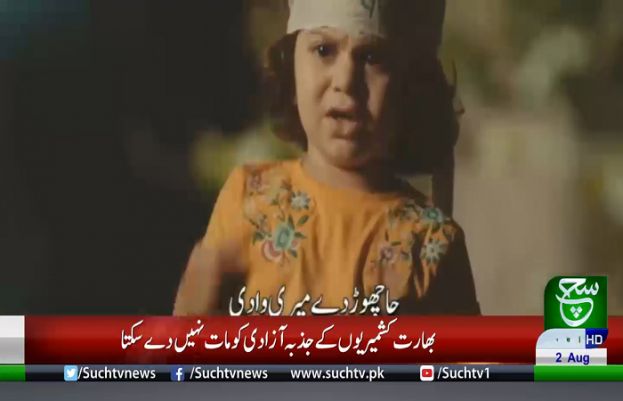 The Inter-Services Public Relations (ISPR), the press wing of the military, has released a new song on the occasion of Youm-e-Istehsal in solidarity with the Kashmiris.

Director-General ISPR Maj Gen Babar Iftikhar shared the song on Twitter and said it is a tribute to the brave people of Kashmir and their relentless struggle for freedom.

The title of the song is ‘Ja Chor Day Meri Waadi’ (Leave my Valley) and begins with the clock ticking that marks 365 days since August 5, 2019, when India had put Kashmiris under lockdown. The song is sung by Shafqat Amanat Ali.

The song highlights the sufferings of Kashmiris, Kashmir uprising and human rights violations by Indian occupation forces in Occupied Kashmir.

A tribute to the brave people of Kashmir and their relentless struggle for Freedom.
link:

August 5th, 2020 marks one year of abrogation of Article 370 and lockdown and curfew in Indian Illegally Occupied Jammu and Kashmir (IIOJK).

Pakistan will observe ‘Youm-e-Istehsal-e-Kashmir’ (Day of Exploitation in occupied Kashmir) on August 5, to mark one year of Indian government’s move of scrapping special status of the valley.

This was announced by Foreign Minister Shah Mehmood Qureshi while addressing a press conference in Islamabad on July 31.

The foreign minister said that Kashmiri people are facing immense difficulties, pain and persecution under the continued military siege for the last one year.